If you’re reading this blog post, you’ve likely read a book or two that I’ve written.  You may recall my occasionally mentioning some variation of the “starburst, swords and anchor” insignia of Siobhan Dunmoore and Zack Decker’s Commonwealth Armed Services.  I finally got around to designing it as a further branding of my military science fiction series.  The Navy insignia worn by Dunmoore, Hera Talyn (when she’s in uniform) and other naval personnel is the “starburst, swords and anchor” insignia, minus the swords.  Army and Marine Corps personnel wear regimental insignia, of course, until they become general officers and wear the “starburst, swords and anchor” insignia, minus the anchor.  As a first design effort, I’m rather pleased by it.  Once I’m sure I like the insignia, you might find it included in future book cover designs. 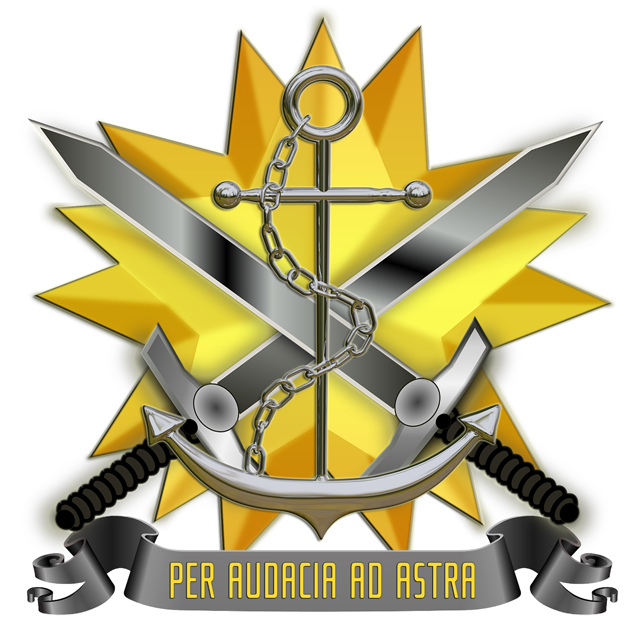 And since I’m on a roll, I also came up with the Commonwealth Constabulary insignia.  Its motto is “Let justice be done.”

And in other news, all of my novels are now available in hardcover format.

And So It Goes

Mrs Thomson and I returned from our annual springtime scuba diving pilgrimage to an undisclosed tropical location a few days ago.  Once again, it was a fantastic week spent with good friends diving on some of the best coral reefs in the western hemisphere.  The food and drink weren’t bad either – except for the waistline, that is!

But since coming home, I’ve been diligently working on the project to publish all of my novels in hardcover.  I’m pleased to announced that as of today, the entire Decker’s War series is now available in that format on Amazon, with further retailers to follow.  The first Siobhan Dunmoore adventure is also available in hardcover as of today, with the rest to come later this week.  Once that’s done, I will return to writing Imperial Sunset.  I’ve also come up with the working title for the next Chief Superintendent Morrow mystery, which is planned for later this year – it will be called Mayhem on Mission.

And now, back to work.

In the publishing industry, you’ll normally see books come out in hardcover first, then months later in paperback.  As you may have noticed, I’ve not been following that industry practice.  But I’m catching up – slowly.  I’ve now begun the process to get all of my novels published in hardcover format, starting with The Warrior’s Knife, which is, as of today, available for purchase on Amazon, and will become available through other retailers in due course.  You can see it on Amazon here: https://www.amazon.com/dp/1775135543

The next to come out in hardcover will be Death Comes But Once, which is going through the pre-production checks right now, with the rest to follow over the coming weeks.

Another Spring, another deep freeze.  The calendar might say April, but the thermometer says January.  What the 90 kilometer per hour wind gusts say is something else altogether, but our neighbourhood survived the last thirty-six hours with no visible damage, unlike others.  I’m sure the migrating Canada geese we’ve seen overhead for the last week or so are mighty confused.  My dog certainly seems to be.

At least the bathroom renos are just about done.  The final fixture came in today, so all that remains is two small finishing touches.  A big shout-out to the folks at Distinctive Bathrooms and Kitchens for a great job.  I can’t recommend them enough.  And since I like hanging around the tradesmen when they’re working so I can watch and I’m not shy about asking questions, I learned a lot of little tricks and techniques I’ll find helpful when I’m doing my own work.  I owe a big thanks to all of them for patiently explaining their work and indulging my enthusiasm.

And when it comes to my own trade, that of storyteller, I’m happy to report Imperial Sunset (Ashes of Empire #1) hit  the one-third, or 33.3% completion mark today.  That’s almost 140 pages or 11 chapters in two and a half weeks.  Not too bad, if I say so myself.